Today, I am remembering a childhood hero, astrophysicist/author Carl Sagan. I was 12 when I bought his first book, Planets, from the Life Science Series. I paid for it from money I earned picking potatoes on the family farm in Pennsylvania. (I was given 10 cents for each 60-pound bushel. The book cost $3.99 and came in the mail a month after I ordered it. You do the math – how many pounds of potato picking is Planets worth?)

I still have the book. It’s in good shape considering 50 years of use.

Today would have been Sagan’s 81st birthday. So, I am sharing some of my favourite Saganisms. In the meme at the top of this page, you can read “It is far better to grasp the universe as it really is than to persist in delusion, however satisfying and reassuring.” But alas, to have the wisdom to shake delusion is beyond the power of most of us. But we should try, shouldn’t we?

Acknowledging the power of seductive delusion, I am well aware of some of the faults attributed to Dr Sagan. He was a childhood hero, but not a childhood god. Even today I sometimes squirm a little when I see an old clip of Carl Sagan and he seems to exaggerate the letter ‘b’ in the word millions. Or maybe he really meant billions and billions. But you catch my point, I hope. In the role of America’s greatest promoter of science in the 60s, 70s, and 80s, he occasionally had to suffer self-parody. But it was worth that price when we remember the people whom he led towards rationality through his enthusiasm for science.

I don’t imagine many people are reading Carl Sagan these days, except when his quotes are attached to pictures of galaxies and sunsets. But even in twenty-word sound-bites, Carl Sagan delivers. Here are a couple quotes worth pasting to Facebook today:

Somewhere, something incredible is waiting to be known.
If you want to make an apple pie from scratch, you must first create the universe.
We live in a society exquisitely dependent on science and technology, in which hardly anyone knows anything about science and technology.
Science is a way of thinking much more than it is a body of knowledge.
The universe seems neither benign nor hostile, merely indifferent.

I also like to remember this line from The Demon-Haunted World: Science as a Candle in the Dark – written by Carl Sagan and his wife Ann Druyan:  “One of our grandmothers learned to read because her father, a subsistence farmer, traded a sack of onions to an itinerant teacher. She read for the next hundred years.”   That’s a wonderful testimony on the power and love of learning and knowledge.

By the way, resting on my deck here in Calgary is my 8-inch Celestron. We named it Carl. 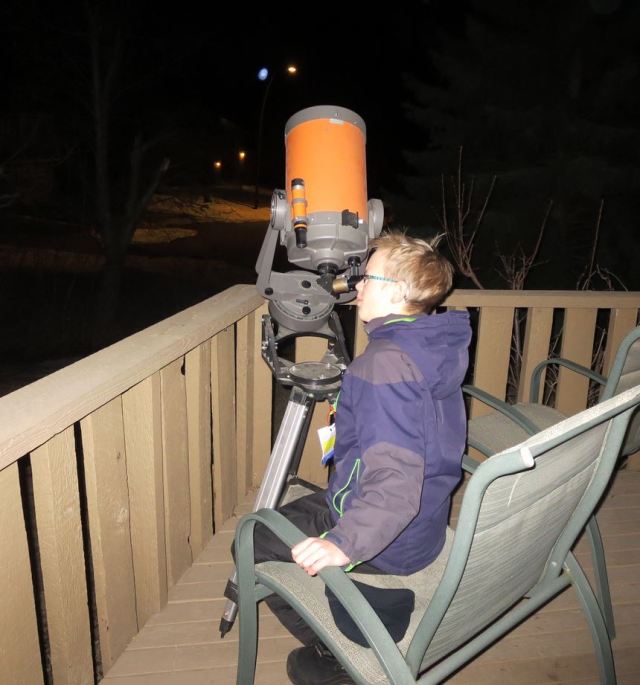 My son, Daniel, hanging out with Carl, the telescope.

Ron Miksha is a bee ecologist working at the University of Calgary. He is also a geophysicist and does a bit of science writing and blogging. Ron has worked as a radio broadcaster, a beekeeper, and Earth scientist. (Ask him about seismic waves.) He's based in Calgary, Alberta, Canada. Ron has written two books, dozens of magazine and journal articles, and complements his first book, Bad Beekeeping, with the blog at badbeekeepingblog.com. Ron wrote his most recent book, The Mountain Mystery, for everyone who has looked at a mountain and wondered what miracles of nature set it upon the landscape. For more about Ron, including some cool pictures taken when he was a teenager, please check Ron's site: miksha.com.
View all posts by Ron Miksha →
This entry was posted in Culture, People, Philosophy and tagged Carl Sagan, Planets, science quotes, stardust. Bookmark the permalink.