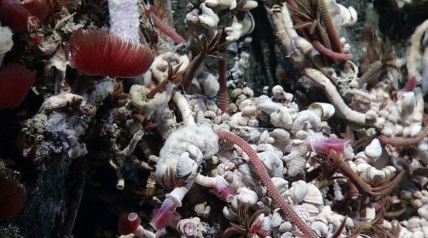 Tube worms: a smoker’s life
U of Washington photo

If all life on the surface of the Earth died, who (or what) would mourn the loss? Not such a hypothetical question. A miscreant meteor could end our little party in a flash. But there is a rather good chance that deep, deep, deep below the waves life would carry on. In fact, about a thousand kilometres west of my laptop, hot volcanic smokers at the Juan de Fuca ridge are generating energy and nutrients for giant tube worms who may one day inherit the keys to our cottage.

This week we had explosive news about the latest eruption of a seamount which rises smack-dap atop Juan de Fuca’s spreading rift.  It’s the youngest piece of a long volcanic chain of bumps that stretches from Alaska’s Aleutians to the ocean floor off the Oregon coast. The seamount chain seems to be generated by a fixed ‘hot-spot’ which has been making a string of volcanoes for millions of years while ocean crust has passed overhead.

(Here we are talking about two different sorts of geology: rifts and hot spots. They do not normally coincide, but in this peculiar case, they do. Seamounts are conical volcanoes thought to be rising from hot spots; rifts are long narrow chasms that shove crust apart. It is a rare coincidence that the two occur at the same location, as they do at the tail end of the Cobb-Eickelberg Seamount chain.)

Geophysicists at the University of Washington were rather pleased that they could predict the Axial Seamount eruption. Their prognostication was based on the ebb and flow of pressure and the resulting inflation of the mount. When it reached critical parameters, the scientists predicted the blast and the volcano obliged. I am hoping that the spew doesn’t hurt our wormy cousins at the hydrothermal vents.

The deep-sea rift vents (and possibly the new conical volcano) are spewing steamy nutrients that could feed the Earth’s last great hope for survivors of Armageddon. The smokers, as some of the vents are called, are spewing super-heated water which, under pressure, is several hundred degrees hotter than neighbouring seawater. These geysers lift minerals, including sulfides that seem to be a favourite snack for some odd types of bacteria. The bacteria, in turn, are eaten by a variety of predators. An entire unique realm of life has developed in the blackness of the deep ocean bottom, far from sunlight and surface influences.

Black Smokers, off American west coast in the Pacific
US gov’t photo: NSF

The vents, geysers, and smokers were discovered in 1977. They create an amazing seascape. While most of the deep ocean is unnervingly quiet, the sea smokers are a haven for bizarre wildlife. An unmatched ecology exists there, totally disconnected from the sun’s energy. At such a depth, the Earth’s core itself is animating a realm entirely independent of the rest of us, providing life-sustaining energy. Among its bizarre creatures, the Pacific has giant tube worms, some as tall as an adult human. These live in superheated hydrosulphuric-laden water bubbling from the boiling sea geysers.

Rather than eating the bacteria thriving near the vents, about half of a tube worm’s weight is composed of those friendly microbes. In their symbiotic friendship, tube worms suck passing particles of hydrogen sulfide, carbon dioxide, and minerals from the hot vents and pass these as food to the bacteria adhering to their bodies. Lacking a digestive tract, the worm feeds the bacteria, then ingests the bacteria’s excreted organic material. The tube worm turns this into more tube, thus attracting more bacteria.

For us, there should be comfort in knowing that this distant and distinctly alien environment exists. We have no need to fear the total annihilation of all of Earth’s life. After being pelted by an asteroid, or suffering a cataclysmic volcanic event, our planet’s crust may melt, the atmosphere may evaporate, surface life may vanish. But two kilometres below the sea’s surface, giant tube worms will flourish undisturbed near the planet’s mid-ocean rifts. Life on Earth will continue. And on that cheery note, we bide you a good day!

Ron Miksha is a bee ecologist working at the University of Calgary. He is also a geophysicist and does a bit of science writing and blogging. Ron has worked as a radio broadcaster, a beekeeper, and Earth scientist. (Ask him about seismic waves.) He's based in Calgary, Alberta, Canada.
View all posts by Ron Miksha →
This entry was posted in Geology, Oceans and tagged Axial Seamount, black smokers, extinction, giant tube worms. Bookmark the permalink.