Tibet’s mysterious plateau – part of the largest and thickest bit of earth crust anywhere on the planet – was recently subjected to the scrutiny of a group of Kansas University scientists. They flew into Lhasa, capital of Tibet, then took a 12-day jeep trek to the spot they felt might give up the plateau’s secret. How was the mammoth block of continental crust built and why is it spreading out, east-to-west?

The KU geologists collected more than 60 samples along a rift valley cutting the Tibetan plateau. Mostly they sampled granite, the rock that forms much of the core of this mountain range, the largest range in the world. Granite is an igneous rock, forming when magma slowly cools and crystallizes inside the crust. Granite commonly contains zircon, a mineral that allows reasonably easy and accurate age-dating. Zircon crystals often contain uranium, which decays into lead. The ratio of U/Pb reveals the age of the crystal, which yields the age of the granite and the hosting mountains. 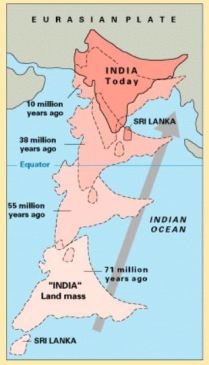 The team found that the zircon formed 15 million years ago, coinciding with the time the Tibetan plateau began its east-west stretching. Pressure from the south squeezes the plateau and forms a modern rift valley which grows northward at a rate of 15 millimetres a year – the same speed that India pushes under the Himalayas, just to the south. How do we know the rate these blocks move? Over 2,000 GPS tags are anchored into crust around the world – scientists track the moving continents as if the crustal plates were a fleet of ocean freighters hauling stone and gravel.

The Indian subcontinent is a chunk of mobile continental crust that can be traced across the Indian Ocean to its launching point near east Africa. It is the mother of the world’s greatest mountains. Plate tectonics, of course, built the Himalayan range and indirectly causes the odd widening of the Tibetan plateau. Because plate tectonics was established over 50 years ago, it might seem mote to reconfirm India’s role in south Asia, but for a long time this seemingly obvious geological task was not so broadly accepted.

India seemed to be a geological outlier in the plate tectonics story. For decades, some well-positioned geologists absolutely refused to believe India had floated in from the southwest. Howard Meyerhoff, once editor of the highly prestigious Science, is a notable example. Years after its general acceptance, Howard and his son Arthur Meyerhoff doubted plate tectonics in general and spent years diligently producing points of discrepancy within the theory. They were apparently more than devil’s advocates, they seem sincerely convinced that plate tectonics was a theory that would eventually fail.

The younger Meyerhoff, Arthur, produced a substitute hypotheses. His 1988 book, Surge Tectonics, proposed a creative alternative earth-model: an interconnected near-surface world-wide plumbing system that conveys melted igneous rocks. This plumbing system, he suggested, was being misinterpreted as plate tectonics. I’ll write more about Meyerhoff’s curious idea of surge tectonics in a future post as it is an intriguing theory that has seen a recent rebirth, albeit in a transfigured form. At the moment, I’d like to further consider why India was once seen as an unlikely candidate as the force that built Tibet and the Himalayas.

The Meyerhoffs were convinced that India had always been part of Asia. They disagreed with the tectonics model that the subcontinent had drifted into place from somewhere near Madagascar and elevated the Himalayas into existence by striking Asia. Part of their argument was geological, part was based on paleobiogeography and fossils. Even today, there are a few who claim that there is “overwhelming geological and paleontological evidence that India has been an integral part of Asia since Precambrian time. If the long journey of India had actually happened, it would have been an isolated island-continent for millions of years – sufficient time to have evolved a highly distinct endemic fauna. However, the Mesozoic and Tertiary faunas show no such endemism, but indicate instead that India lay very close to Asia throughout this period, and not to Australia and Antarctica.” (1) As recently as 2012, geologist N. Christian Smoot, who had written papers with the late Arthur Meyerhoff, published Tectonic Globaloney. His book contains the line, “India has been in place for several billion years rather than wandering around.” (2)

The Meyerhoffs asserted their opposition was based on “geological fact, which nothing can change.” (3) But new information can change “geological fact” as we have seen repeatedly. Almost invariably, a scientist who claims to hold facts that “nothing can change”, is proven wrong. The facts are always changing, always open to investigation and confirmation. Today, geologists believe India was transported atop a north-bound convection current. For them, this best theory fits the geological facts – as understood at the moment.

The number of geoscientists who disagree with the tectonic mobility of the Indian subcontinent is likely fewer than a couple hundred. Meanwhile, 10,000 other geoscientists see ample evidence – reinforced monthly by researchers such as the team from Kansas. At present, each new discovery – each linear fault and fracture, each shard of fossil, and each bit of subatomic decay in zircon crystals – bolsters the basic plate tectonics model developed by Harry Hess, Maria Tharp, Tuzo Wilson, Lawrence Morley, Jason Morgan, Xavier LePichon, and dozens more during the 1960s. The mountain mysteries are still best explained by mobile continents. Fifty years of evidence has reinforced, not demolished, the theory. And, of course, there are those GPS records that have been inexorably documenting the wanderings of all the continents – including India.

Ron Miksha is a bee ecologist working at the University of Calgary. He is also a geophysicist and does a bit of science writing and blogging. Ron has worked as a radio broadcaster, a beekeeper, and Earth scientist. (Ask him about seismic waves.) He's based in Calgary, Alberta, Canada. Ron has written two books, dozens of magazine and journal articles, and complements his first book, Bad Beekeeping, with the blog at badbeekeepingblog.com. Ron wrote his most recent book, The Mountain Mystery, for everyone who has looked at a mountain and wondered what miracles of nature set it upon the landscape. For more about Ron, including some cool pictures taken when he was a teenager, please check Ron's site: miksha.com.
View all posts by Ron Miksha →
This entry was posted in History, How Geophysics Works, Non-drift Theories and tagged drift, geophysics, GPS, history, India, Meyerhoff, mountains, plate tectonics, Tibet. Bookmark the permalink.