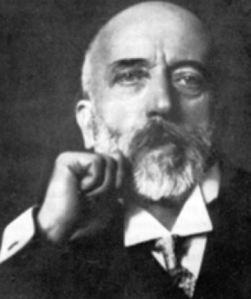 Today is the anniversary of the birth (January 23, 1857) of a brilliant geophysicist with an unpronounceable name (unless you are Croatian) – Andrija Mohorovičić. (You may say On-Dree-Ya Mow-Hoe-Row-Vitch-Itch. Or, like many a grad student, you could simply call him Moho.) Mohorovičić made an amazing deduction about the transition zone marking our planet’s mantle-crust boundary.  To com- memorate his life and his discovery, I am republishing part of the man’s story from my book, The Mountain Mystery. If you have even a meager curiosity about how the Earth works, you will likely find this tale interesting . . .

The fact that continents are moving is not in doubt – GPS measurements have proven it. But, in order to slide our big clunky continents, it helps to have a slippery base at the underside of the crust. The abrupt discontinuous slippery zone was discovered by the geophysicist Andrija Mohorovičić. He was born in the Croatian village of Volosko, near the Adriatic Sea. The place is noted as Mohorovičić’s birthplace (a metal plaque tacked on an old building says as much), but today the town is usually crowded with windsurfers, drawn by the area’s incessant breezes. Mohorovičić said it was those constant winds that encouraged his study of meteorology, his primary interest. He was awarded scholarships abroad, far from the village where his father worked as a blacksmith making ship anchors. At 15, Mohorovičić was studying climate, experimenting in physics, and he could read Croatian, Italian, English, and French. He added German, Latin, and Greek in university. Not bad for the village blacksmith’s son.

Mohorovičić studied physics in Prague in the 1870s. His school was outstanding. Instructors included Hornstein, a sunspot and magnetism theorist who taught astronomy and analytic mechanics; Lippich, a theoretical physicist who taught the physics of energy (and was replaced by Albert Einstein on retirement); and Mach who concentrated on diffraction, refraction, and propagation of sound waves – the essentials of seismology. Ernst Mach also explored the shock waves produced when a projectile exceeds Mach 1.

In 1893, Mohorovičić earned his doctorate at age 35, studying cloud formations. He tracked them using a nephoscope he perfected – a device that followed clouds and determined their heights and speeds. Before submitting his thesis, he was already head of a meteorological observatory and he had created the national weather service for his entire country. His work at the weather observatory began to include geomagnetism and seismology.

His switch from meteorology to geophysics was somewhat abrupt and risky for the respected scientist in his early forties, particularly within the hierarchical system of the old Austro-Hungarian Empire. His meteorology papers were well received and diverse – Mohorovičić even recorded “atmospheric gravity waves” caused by the 1908 Siberian meteor which had destroyed a huge swath of forest 5,000 kilometres away, along the Tunguska River. But Mohorovičić abandoned meteorology because climate study “should have at disposal about a thousand years of observations, not a hundred” before there was enough data to allow meaningful conclusions. He figured climate studies should be deferred “to our far descendants” who might then have the necessary information to understand it. (1)

He also voiced frustration with the fact that his meticulously derived short-term weather forecasts were only 77 percent accurate, though that sounds rather good to me! So Mohorovičić completely abandoned meteorology and focused on seismology. His shift to geophysics reflected the changing focus of earth science around the world. His own institute, Zagreb’s Meteorological Observatory, was renamed the Institute of Meteorology and Geodynamics, then rebranded again as the Geophysical Institute in the years after Mohorovičić, indicating the growing importance of geophysics. Not long after Mohorovičić made his career change, an earthquake struck near his home in Zagreb. That event, at the age of 53, led to the most important discovery of his life.

The 1909 Pokuplje Event toppled chimneys and a few stone buildings. It was a relatively benign earthquake. There were no recorded fatalities. However, it supplied a wealth of data from newly installed seismographs across central Europe. Mohorovičić asked colleagues from Munich, Strasbourg, Rijeka, Vienna, Sarajevo, and 24 other stations to send their records to him. He was able to derive startling conclusions from the obscure squiggles on those seismic sheets. Mohorovičić compared arrival times of the shock waves at the various stations and plotted what he labelled krivulje vremena, or time curves, for the earthquake’s phases. (2)  Interestingly, though his landmark graph has fewer than 30 words on it, titles and notes appear in three languages – Croatian, German, and Latin. Mohorovičić learned physics in German, was trained in the Classics, but was most comfortable in his first language. It was a time of transition in classical education – within a few years, Latin would no longer be inscribed on final drafts of scientific papers. 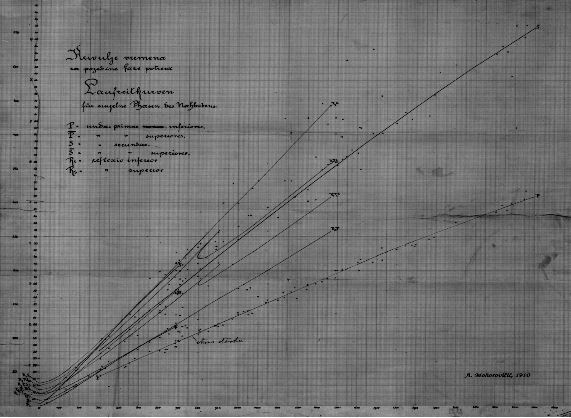 Seismic waves from the Moho – graphs labelled in Latin, German, and Croatian

As he analyzed the earthquake data, he became seriously confused. It should have been a simple step to triangulate the location of the epicentre, but Mohorovičić failed again and again. He gave up the notion that, with depth, the velocity of seismic waves travelling inside the Earth increase linearly. After plotting the Pokuplje earthquake data from those 29 different sets of seismograms, Mohorovičić noticed that the pressure waves (P-waves) required two separate curves on his time-travel graphs. Plotting time in seconds on the Y-axis and distance in kilometres on the X-axis for each station’s records, his travel-time curves “revealed two individual primary waves at different velocities,” he wrote. (3) 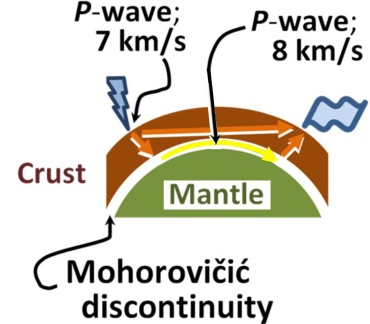 It was a bold step, a leap into scientific uncertainty, when he decided to ignore conventional wisdom and assume that the earthquake shock waves had entered a strange realm, about 50 kilometres below the surface, where they abruptly travelled much faster than expected. He worked out his thoughts with geometric drawings based on the raw data. Through that, he discovered the physics function scientists now call the Mohorovičić Law.

He noticed that the same sort of seismic shock wave was travelling at two different speeds through the Earth. It was as if the voice of a friend, calling from some distance away, reached you at two different times. This might be possible if in addition to travelling through the air, the sound of your friend’s words also vibrated along an adjacent stone wall and approached your ears by that faster route as well. Mohorovičić realized the seismic P-waves he was observing had found two different routes to the seismometers – a slow shallow route and a fast deep route. The energy from the earthquake’s epicentre had split up, some of the energy waves finding a faster path along an interface between layers deep within the Earth. Mohorovičić worked out the refraction equations, the ray-paths of the P-waves, and their reflection points as the sounds knocked around inside the Earth’s crust, and he concluded there had to be an abrupt change in the material that comprises the Earth’s interior. 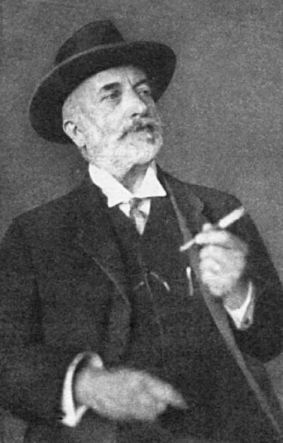 From his seismic records, Mohorovičić was able to show that the inner Earth has distinct layers, and the crust has a definite thickness, ending at the slippery boundary zone which today is called the Moho Discontinuity, or the Moho. A change of composition at the mantle and crust boundary creates the seismic velocity change that puzzled him. Mohorovičić estimated that the crustal layer of the continent in his part of Europe was roughly 54 kilometres thick. He wrote, “I decided on a rounded-down depth of 50 kilometres, since this was the approximate depth of the P-waves, thus the lower boundary of the topmost layer of Earth’s crust is located at this depth. At this boundary, the material of which the Earth’s deeper interior consists must change abruptly, because the velocity of the earthquake waves’ propagation  changes abruptly.” (4)

Mohorovičić was inferring details about a dark inaccessible place. No one will ever visit the boundary between crust and asthenosphere, but Mohorovičić described it.  Using his techniques, later refinements and more data show us that ocean crust is comparatively thin – just 5 to 9 kilometres – but continental crust is exactly as Mohorovičić had determined, about 50 kilometres thick. Very significantly, Mohorovičić showed that the planet has a discontinuity, which serves as a detachment, forming a slippery zone, allowing continents to slide.

Think about his discovery. It was made from a couple dozen plots of the amount of time it takes an earthquake’s waves to reach a seismic recorder. From that, Mohorovičić surmised the nature of the Earth 50 kilometres below the surface. Of his amazing feat of calculation, Mohorovičić’s biographer Dragutin Skoko wrote, “. . . in the Earth’s interior, seismic waves travel invisibly and inaudibly. They can be followed only by mathematical equations.” (5)   Mathematical equations and very clever thought.

Ron Miksha is a bee ecologist working at the University of Calgary. He is also a geophysicist and does a bit of science writing and blogging. Ron has worked as a radio broadcaster, a beekeeper, and Earth scientist. (Ask him about seismic waves.) He's based in Calgary, Alberta, Canada. Ron has written two books, dozens of magazine and journal articles, and complements his first book, Bad Beekeeping, with the blog at badbeekeepingblog.com. Ron wrote his most recent book, The Mountain Mystery, for everyone who has looked at a mountain and wondered what miracles of nature set it upon the landscape. For more about Ron, including some cool pictures taken when he was a teenager, please check Ron's site: miksha.com.
View all posts by Ron Miksha →
This entry was posted in Biography, Geology, History, How Geophysics Works, Plate Tectonics, The Book and tagged Croatia, earthquakes, geophysics, inner Earth, Moho, Mohorovičić, mountain mystery book, plate tectonics, Pokuplje Event, seismic recording, Tunguska. Bookmark the permalink.

2 Responses to Riding the Moho