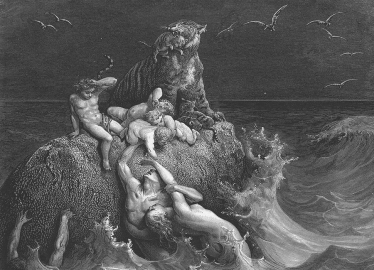 An interesting blog posting, Catastrophic History, produced on the website The Not So Solid Earth, makes the point that much of future archeology will be marine archeology. During the last ice age, a lot of sea water was captured in ice sheets and was not topping up the oceans, so coasts were more exposed. Those mild, moist shorelines – now flooded – would have been ideal settings for villages older than eight or ten thousand years. In today’s blog, we’ll look at the conditions that followed those days and re-exam the status of Noah’s Flood – from a scientific perspective. 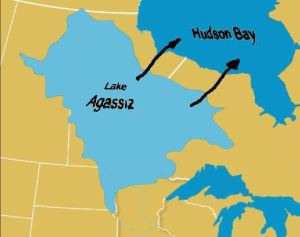 Possible route of the draining of Lake Agassiz

In The Mountain Mystery, I wrote a bit about the last ice age’s floods.  Melt water from two-kilometre-thick glaciers formed enormous pools behind a series of ice dams near Hudson Bay. One such pool was Lake Agassiz, the largest lake ever known. It is gone now, but it once covered much of central Canada and a vast part of the northern American plains. Before the largest of the dams broke, about 9,000 years ago, Agassiz held more water than all the lakes in the world today. The ice dam spectacularly failed and its water drained into the ocean within days. Meanwhile, a smaller, but similar lake, Lake Missoula, was 700 metres deep when its ice dam failed. Although smaller than Agassiz, it nevertheless held more water than lakes Erie and Ontario combined and covered vast sections of Oregon, Washington, and Idaho. In just 48 hours, Lake Missoula drained through the Columbia River Gorge with waters rushing 150 kilometres per hour.

When the waters of Lakes Agassiz and Missoula reached the oceans, the seas rose 10 feet, or 3 metres, flooding the world’s coasts. In perhaps a month, an area the size of Great Britain was inundated on the Arabian peninsula. The rising water created the Persian Gulf. The coast of Africa was flooded. Most of the world’s people lived along coastal plains which disappeared in mere days. Every part of the Earth was affected. The shorelines of the world were redrawn. 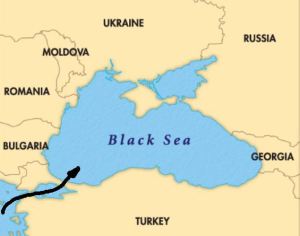 At the time, prime farmland and small villages surrounded the Black Sea, which was then a fresh-water lake draining into the Aegean Sea. With global ice melt and the rising oceans, the salty Mediterranean burst through the Bosphorous “with a force 200 times greater than Niagara Falls” and water along the Black Sea rose about 15 centimetres (6 inches) a day, flooding 155,000 square kilometres (according to a 1997 paper by Columbia University marine geologists Bill Ryan and Walter Pitman). At least this is their theory. Before the Great Flood, the valley and lake would have rivaled the Garden of Eden in lush productivity – or at least, rivaled Eden in plausibility of literal existence.

Unusual for a scientific paper, the Ryan-Pitman theory was announced in the New York Times before the paper was published in Marine Geology. The discovery also resulted in a best-seller, Noah’s Flood: The New Scientific Discoveries About The Event That Changed History, written by the two scientists. This made a few observers wary.

Nevertheless, there is evidence that the Black Sea rose, drowning at least one settlement claimed to have been discovered in 1999 by Robert Ballard, the oceanographer who found the sunken Titanic. According to National Geographic, Ballard said that he found hewn logs that likely made part of a structure that may have made part of a village, now hidden by 95 metres of murky water, 12 miles off the coast of Turkey. Some in the press announced the finding as proof of the biblical Noah’s Flood. With speculation running high, Ballard himself cautioned that it was a localized flood (not a global deluge), albeit one of biblical proportions. All of this is rather tentative, of course. But who could not love 1999’s story that included Noah, the grandfathers of agriculture, and the man who had discovered the Titanic?

But ten years later, in 2009, other scientists revisited the work of Ryan and Pitman. The latest evidence seems to throw cold water on some of the flood theory’s details – at least on the speed, depth, and severity of the Bosphorous breach. A study in the Quaternary Science Reviews indicates that the flood was much smaller. Liviu Giosan of Woods Hole Oceanographic Institution and Florin Filip and Stefan Constantinescu of the University of Bucharest found evidence that water levels in the ancient Black Sea-Lake rose just 5 to 10 meters around 9,400 years ago, not 50 to 60 metres as Ryan and Pitman proposed occurred 5,600 years ago. The updated timing – 9,400 year ago – coincides more closely to the rupturing of the Agassiz and Missoula ice dams. According to Giosan et.al., the flood would have drowned only about 2,000 square kilometers of land, rather than 155,000 square kilometers.

Nevertheless, there is general agreement that a huge deluge destroyed villages over 7,000 years ago. This brings us back to our original thought that many of the great future archeological discoveries are foundering on the seafloor. In 2012, Ballard said, “It’s foolish to think you will ever find a ship,” referring to the Ark. “But can you find people who were living? Can you find their villages that are underwater now? And the answer is yes.” And so it just may be that the future great discoveries will be in marine locations, rather than high dry land.

Ron Miksha is a bee ecologist working at the University of Calgary. He is also a geophysicist and does a bit of science writing and blogging. Ron has worked as a radio broadcaster, a beekeeper, and Earth scientist. (Ask him about seismic waves.) He's based in Calgary, Alberta, Canada. Ron has written two books, dozens of magazine and journal articles, and complements his first book, Bad Beekeeping, with the blog at badbeekeepingblog.com. Ron wrote his most recent book, The Mountain Mystery, for everyone who has looked at a mountain and wondered what miracles of nature set it upon the landscape. For more about Ron, including some cool pictures taken when he was a teenager, please check Ron's site: miksha.com.
View all posts by Ron Miksha →
This entry was posted in Climate, Culture, History, Oceans, The Book and tagged Agassiz, Ballard, Biblical Flood, Black Sea, exploration, history, mountain mystery book, myths, Noah, oceanography. Bookmark the permalink.