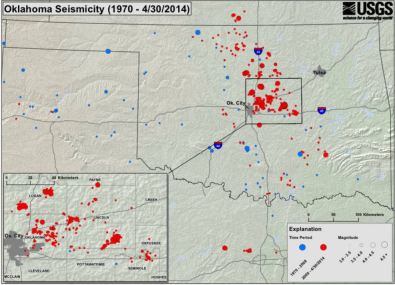 When we think of American earthquakes, we think of California where the huge plates of the San Andreas are slip-sliding past each other. Or maybe the south coast of Alaska, near the subduction zone that formed the Aleutian and Kuril island arc chains. But Oklahoma? Not likely. In the former case, the continental transform fault marks the boundary between the North American and Pacific Plates. In Alaska, the subduction of the Pacific Plate under the North American Plate create the dish rattling. But Oklahoma’s bull’s-eye forces more than a moment’s pause to see how it fits with the general scheme of plate tectonics.

In a recent USGS press release, the government says earthquake activity in Oklahoma has been surging. Although Oklahoma has long been known as “earthquake country,” and has regularly experienced tremors in the range of 3 to 5 magnitude, geophysicists have generally failed to convincingly explain their occurrences so far from plate boundaries. In another posting, I will look into this in a bit of detail and present some of the recent thoughts on the quake activity that unexpectedly extends from South Carolina, west to Missouri, and then arcs further (but more weakly) southward towards Oklahoma City. But at this moment, I want to relate the USGS bulletin.

The Oklahoma Geological Survey and the United States Geological Survey have issued a warning of sorts related to the increase in quake activity in Oklahoma. During the most seismically active year ever recorded – 2013 – there were 109 earthquakes in the state with intensities of 3.0 or greater. Incredibly, during the first four months of 2014, the number reached 145. Recently, the strongest earthquake in Oklahoma’s recorded history “damaged a number of homes and the historic Benedictine Hall at St. Gregory’s University in Shawnee” according to the USGS report.  That one was 5.6 magnitude. Larger ones are expected momentarily.

Although the underlying cause of the brittle cracking and fracturing in the south-central state has probably existed for millions of years, the recent upswing is unprecedented in recorded history. It is related to oil patch activity, says the USGS. In particular, the injection of waste-water fluids from drilling and pumping activities.

Here is a snippet from the government report:  “The analysis suggests that a likely contributing factor to the increase in earthquakes is triggering by wastewater injected into deep geologic formations. This phenomenon is known as injection-induced seismicity, which has been documented for nearly half a century, with new cases identified recently in Arkansas, Ohio, Texas and Colorado.”  It has been documented for over half a century, but the rate of increase and severity of shakes is dramatically increasing, probably due to fracking activities which are new to the technology of hydrocarbon extraction.  The likelihood that industry-caused earthquakes will be truly devastating is rather small. There will not likely be any 8.0 magnitude earthquakes caused by these wastewater injections or, increasingly, by fracking. However, weakened foundations on buildings, broken dishes, and (worst of all) ruptured and cracked aquifers are undoubtedly to be expected. At least until the oil and gas run out.

Ron Miksha is a bee ecologist working at the University of Calgary. He is also a geophysicist and does a bit of science writing and blogging. Ron has worked as a radio broadcaster, a beekeeper, and Earth scientist. (Ask him about seismic waves.) He's based in Calgary, Alberta, Canada.
View all posts by Ron Miksha →
This entry was posted in Engineering, Exploration and tagged earthquakes, fracking, oil industry. Bookmark the permalink.