Christmas Eve, 2015. A bit late to buy The Gilbert U-238 Atomic Energy Lab for your favourite budding young nuclear physicist. 65 years too late. It’s hard to imagine that Dad could once easily buy uranium, radium, and all the trappings for Junior’s birthdays and holidays. It’s difficult to believe that he’d buy the Gilbert Lab because in 1951 the Atomic Energy Lab cost $50 – that’s over $400 in today’s currency.

I would have been thrilled to get that uranium kit, but I wasn’t even born yet, so I missed out. For my 8th birthday, I did receive a radium glow-in-the-dark wristwatch.  I wore it night and day in the mid-60s. I was proud of it. But $50 was out of line for any gift in our family in those days, even if the lab had not been discontinued by then. 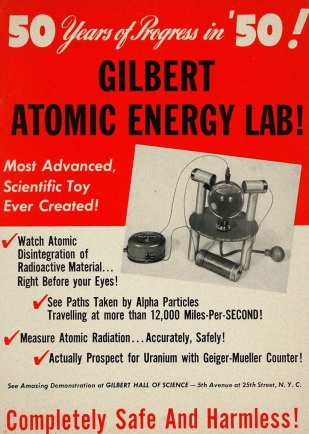 The lucky boys who did receive the U-238 Atomic Energy Lab would be 80 years old now – if they survived the side-effects of their fathers’ radioactive gift-giving. (I mention only fathers and sons because this toy was sold in the days of the traditional ’50s nuclear family, the days when atoms were considered manly stuff.)

The Gilbert lab included uranium ore, polonium, a Geiger-counter, and a cloud chamber, so the manufacturer had thought of everything. Except an anti-radiation pill and lead-plated underwear.

Some of the young people who handled the Gilbert Atomic Energy Lab really did become nuclear physicists – Columbia University bought 5 sets as training accessories for their physics students. But the Gilbert Company’s aim was to sell thousands of these kits to kids for good old-fashioned fun and for home-schooling nuclear physics lessons.

In his autobiography, written in 1954, the founder of the eponymous A.C. Gilbert Company wrote:

The most spectacular of our new educational toys was the Gilbert Atomic Energy Laboratory. This was a top job, the result of much experimentation and hard work. We were unofficially encouraged by the government, who thought that our set would aid in public understanding of atomic energy and stress its constructive side. We had the great help of some of the country’s best nuclear physicists and worked closely with M.I.T. in it’s development.

So, with M.I.T, the federal government, and some of the best nuclear physicists encouraging the U-238 Atomic Energy Lab, you’re probably wondering why it’s no longer sold in all the finest toy stores (or, at least, Toys ‘R Us).  The Atomic Energy Lab was on the market for just 2 years, 1950 and 1951. You would need to have been a youngster in the early 1950s to have received this dandy opposure to the Darwinian awards.

Safety was not the reason the kit was dropped like a hot fission pellet.  As the ad  radiantly states, it was a completely safe and harmless science kit.  But A.C. Gilbert had trouble making a profit from the toy. The price and the level of sophistication needed to assemble the cloud chamber were seen as the main obstacles that prevented this toy from becoming a perennial Christmas favourite.

By the way, if you are still upset that your dad didn’t buy the $50 atomic kit for you six decades ago, you can remedy your disappointment. I saw the labs listed on E-Bay.  This piece of nostalgia will cost you at least $2,300, but imagine how much fun you’ll have – you’ll be literally glowing with delight!

Ron Miksha is a bee ecologist working at the University of Calgary. He is also a geophysicist and does a bit of science writing and blogging. Ron has worked as a radio broadcaster, a beekeeper, and Earth scientist. (Ask him about seismic waves.) He's based in Calgary, Alberta, Canada. Ron has written two books, dozens of magazine and journal articles, and complements his first book, Bad Beekeeping, with the blog at badbeekeepingblog.com. Ron wrote his most recent book, The Mountain Mystery, for everyone who has looked at a mountain and wondered what miracles of nature set it upon the landscape. For more about Ron, including some cool pictures taken when he was a teenager, please check Ron's site: miksha.com.
View all posts by Ron Miksha →
This entry was posted in Culture, Science Education and tagged Gilbert Atomic Energy Lab, nuclear energy, science education, uranium. Bookmark the permalink.

1 Response to A Glowing Holiday Gift