During the 1849 California Gold Rush, the easy pickings around Sutter’s Mill were staked off and scooped up rather quickly. The ’49ers, as the first prospectors were called, put gold in the bank while the ’50ers had to look further afield. One late comer apparently found the mother of all lodes, Ali Baba’s missing horde, up near Oregon. Trouble was, he couldn’t remember quite where, but if you’d buy him a shot of whiskey (or two) he’d draw you a map and tell you everything. This ploy kept the barfly well-lubricated because his audience would head up to Oregon from San Francisco and never come back. Meanwhile, a new green prospector from Chicago would arrive to hear the tale.

John Hillman, a California gold rush prospector, was seduced by the story of the Lost Cabin Mine. He wasn’t successful, but his wanderings took him to the edge of a lake he named Deep Blue Lake. It was rather clever of him to realize that he had found a deep lake. He might have thought it was bottomless. That’s what Major Clarence Dutton of the US Geological Survey must have thought when he cast his first depth gauge into the lake. 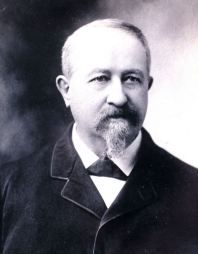 Dutton, a Yale graduate from New England, fought at Fredericksburg in the American Civil War, then spent much of the rest of his life in the American West as a geologist. He was head of the United States Geological Survey’s Volcanic Geology Division – a role that placed him on volcanic mountains in California and Hawaii. His exploits included sounding the enormous depth of Crater Lake in Oregon. That was not an easy task – it is the deepest lake in the States, but reaching its remote mountainous shore with exploration equipment was nearly impossible.

Dutton’s team – 35 soldiers with 65 horses and mules – carried a half-tonne boat up the lake’s surrounding mountain rim, then carted it down a steep twenty-storey cliff to the water’s edge. Finally they lowered their dinghy onto the cold water. Soldiers maneuvered the survey craft around the lake while Dutton plumbed the icy depths with heavy weights tied to piano wire. He needed those heavy weights to keep the wire straight as it unfurled to the water’s bottom. He made almost 200 measurements. A plot of the depths revealed the throat of a caldera, created by a violent volcanic eruption which natives of the area described in ancient legends.

Klamath and Modoc aboriginal groups had lived and traded around the Oregon lake for hundreds, possibly thousands, of years. The Klamaths had an oral history that described the birth of Crater Lake as a mystic event that included a war between sunny good forces above and evil dark forces within the Earth. A fight between Skell, the good, and Lao, the bad, included the legendary virtue of a human woman. The Klamath myth tells of a huge explosion which ended the good force’s rule over the woman and her earthly lands.

We now know that the explosion of a volcano created the lake’s caldera in an event which would have released as much energy as one thousand atomic bombs. When the volcano Mount Mazama erupted, just under eight thousand years ago, the mountainside was populated. The tale of the loss of those people, the continual tremors, and occasional earthquakes that followed, has remained in oral tradition for all the intervening thousands of years.

When Dutton’s team threw their first cable from shore, it disappeared two hundred metres into the water. Then four hundred. It kept descending, so they retrieved the wire to check for mechanical failures. It seemed to be working correctly. They left the shore and began measuring from their boat. During July and August of 1886, the crew took three soundings each day from spots atop the calm blue water. They surveyed in concentric rings, narrowing inwards. Surveyors stationed along the crater’s rim used line-of-sight plane tables to map the boat’s positions. The greatest depth took a lot of piano wire – over 600 metres, or about 2,000 feet.

Deep blue Crater Lake. The island is Wizard Island, a cone in the middle of the volcanic caldera.

The depth sounding points, plotted on a map of the circular lake, revealed a flat-bottomed caldera with cinder cones, mostly submerged, though one cone rose to form Wizard Island. Major Dutton of the USGS had discovered that Crater Lake is a topless, water-filled hollow volcano. For half a million years, the volcano had grown through steady stages of minor activity to become a mountain. Then Mount Mazama blasted apart – expelling 50 cubic kilometres of volcanic ash and rock. The pulverized pumice covered millions of square kilometres with gritty dust and ash. On the opposite side of the Earth, the sky darkened in Mesopotamia where people had settled small villages and were  learning to cultivate crops and fashion copper into tools. The Mount Mazama eruption lasted just a few brief moments, then the remaining centre collapsed. It took a thousand years for the hollow mountain to fill with rain water and melted snow. The blast which created the Crater Lake and the Oregon caldera was the most violent eruption North America had ever experienced. Today it’s quiet. If you are camping at Crater Lake this summer, enjoy your visit – the mountain is unlikely to explode again.

Ron Miksha is a bee ecologist working at the University of Calgary. He is also a geophysicist and does a bit of science writing and blogging. Ron has worked as a radio broadcaster, a beekeeper, and Earth scientist. (Ask him about seismic waves.) He's based in Calgary, Alberta, Canada.
View all posts by Ron Miksha →
This entry was posted in Exploration, Geology, People, Religion and tagged caldera, Crater Lake, Dutton. Bookmark the permalink.