Katmandu’s earthquake was a tragic surprise; but not unexpected. Katmandu sits atop a fault that releases pressure as continental crust merges. India, which was an island until 25 million years ago, continues shoving itself into Asia. This sparring of continents cost at least 3,400 lives this weekend when the pressure of the grinding plates was released in a 7.8 magnitude earthquake. The incessant south Asia continental clashing has built the Earth’s grandest mountain range – the Himalayas. This time, tectonic force lifted and dropped Katmandu 3 metres (10 feet!) south of where it was a week earlier. The quake ripped a gash along the surface stretching over 100 kilometres from its shallow epicentre. All of this happened in less than 90 seconds. 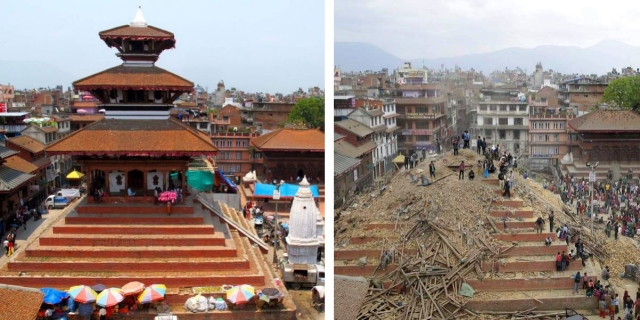 In Nepal’s capital, Katmandu, temples and shrines were destroyed, apartment blocks were leveled, and most of the several thousand deaths in Nepal occurred there. The earthquake, however was centered about 100 kilometres west, near Lamjung, an alpine farming district. Most recovery and emergency operations have focused on the more populated capital, so it is not known how desperate things are for people who live in Lamjung, atop the epicentre. Another site garnering attention is, of course, Mount Everest. It is even farther away from the quake centre (about 220 km), but it has name recognition – and among the 18 known deaths at Everest are westerners, most of whom were there for the sport of climbing the mountain. Avalanches caused by the earthquake caused the deaths at the Everest base camps; these have been heavily covered by the sometimes myopic western news media. 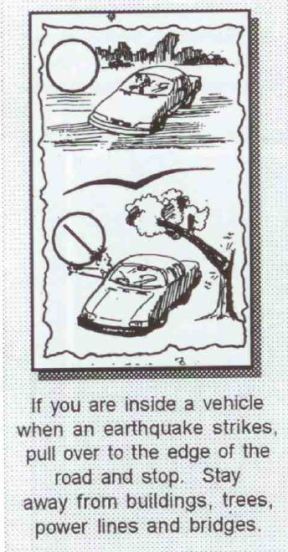 This earthquake was certainly expected, though the exact moment of its arrival could not be foreseen. A few years ago, the non-profit Geohazards International had published a lengthy document, Katmandu Earthquake Scenario, which predicted in painful detail the events unfolding today in Nepal. The charity organization assesses geophysical hazards around the world and it ranked the Katmandu Valley highest among its “risk per capita” stats. Their 32-page booklet was generated to prepare people for the inevitable. It is a powerful read, written in simple English, and it walks us through a moment-by-moment encounter with a potential Katmandu earthquake.  On impact, “school children are crouched under their desks, waiting for instructions from their teachers. Doctors and nurses are helping the most seriously ill patients to protect themselves and are preparing to evacuate the hospitals. Drivers in automobiles pull carefully off to the side of the road, waiting for the shaking to stop. . .” The document gives practical advice, encourages drills and exercises, and follows through the next hour, day, week, month, and year describing what victims should expect after a major Katmandu earthquake. The report discusses medical aid, water, food, electricity, and psychological recovery related to the survival of those affected. If you are thinking you should help, consider a donation to Geohazards International – they seem a worthy outfit. In fact, they have people in Nepal who were already assessing hospitals just hours after the earthquake struck.

Meanwhile, the recovery enters its third day. Poorly built structures (many apartments had unreinforced cement and weak masonry) and the disrupted water and electricity are continuing to take their toll.  At 7.8, this was the largest magnitude earthquake the area has experienced in 80 years and aftershocks as large as 6.7 (also severely destructive) are continuing. Katmandu will recover and rebuild – we hope that the new construction will be designed to withstand similar earthquakes. And we hope that drills and emergency exercises will continue to be part of daily life for the Nepalese. Such practice saved a few lives last week, it will be even more helpful in the future.

This map, prepared by Geohazards International, using US Geological Survey data, indicates the Katmandu Valley was most severely hit. Epicentre is shown centre-left and Mount Everest is top-right on this map.
Follow this link for a larger-scale map.

Ron Miksha is a bee ecologist working at the University of Calgary. He is also a geophysicist and does a bit of science writing and blogging. Ron has worked as a radio broadcaster, a beekeeper, and Earth scientist. (Ask him about seismic waves.) He's based in Calgary, Alberta, Canada. Ron has written two books, dozens of magazine and journal articles, and complements his first book, Bad Beekeeping, with the blog at badbeekeepingblog.com. Ron wrote his most recent book, The Mountain Mystery, for everyone who has looked at a mountain and wondered what miracles of nature set it upon the landscape. For more about Ron, including some cool pictures taken when he was a teenager, please check Ron's site: miksha.com.
View all posts by Ron Miksha →
This entry was posted in Geology, Plate Tectonics and tagged earthquakes, Geohazards International, India, Katmandu Earthquake, Mount Everest, Nepal. Bookmark the permalink.