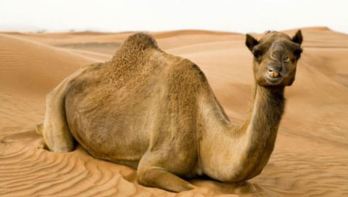 Camels often sit down mighty painfully. Perhaps their joints creak. Perhaps early oiling might prevent permanently hazardous aging. Or perhaps these sentences are just simple mnemonics and we are trying to remember the names of the geological periods.  Here they are: Cambrian, Ordovician, Silurian, Devonian, Mississippian, Pennsylvanian. Each represented by the initial letter of each word in the first sentence. That brings us to 300 million years ago and our camel is seated, painfully. From the sentence “Perhaps their joints creak” we get Permian, Triassic, Jurassic, Cretaceous. We have just killed off the dinosaurs and seen the rise of mammals. The last part of the mnemonic (oiling to prevent aging) gives us the epochs Paleocene, Eocene, Oligocene, Miocene, Pliocene, Pleistocene, Holocene, Anthropocene.

Twenty-five years ago, my geology professor taught us to remember “Careful! Old sexy devils can play ’til Jericho crumbles.” That helped most of us memorize the periods, Cambrian through Cretaceous. But some in the classroom inverted old and sexy, putting Silurian too early, while others had no clue who Jericho was. (“An old man on a TV show,” I told one.)  I like the story about the arthritic camel better. I heard a version of it recently, then rewrote a small part of it.  I can picture the camel in my mind while a devil that plays just leaves me cold. There is no image. The camel mnemonic is better. It replaces Carboniferous with Mississippian and Pennsylvanian – giving a bit of relevance to North Americans; while the last sentence (“Perhaps early oiling might prevent permanently hazardous aging.”) breaks up the Cenozoic into its epochs. And by replacing Recent (a term still found in some geology textbooks) with Holocene and Anthropocene, I was able to bring it up to the latest thoughts in geological nomenclature.

Wondering where outlandish names like Silurian and Devonian originate? Did they arrive fully formed in some geologist’s mind? Are they disturbingly difficult words in order to discourage youngsters from becoming geologists? I know that some eight-year-olds would argue the Jurassic Period was named for a park on an island along the Pacific coast of Central America, but they would be wrong, as children often are. Jurassic comes from Jura, the name of a lowly range of mountains (the highest is only 1,720 metres, or 5,640 ft). The Jura are mostly in Switzerland and France. Jurassic rocks can be found over much of the Earth, especially if one is willing to dig below the surface. Geologists felt they had to call such similar formations something, so they used the name Jurassic. This created the Jurassic Period, a time when the rocks of the Jura Mountains formed and dinosaurs roamed lush humid rainforests.

Similarly, the Permian is named for the ancient Russian Kingdom of Permia, Cretaceous for chalk (creta) found in the Paris Basin, Devonian for rocks exposed near Devon, England and Silurian for the Silures, a Celtic tribe from Wales, which is where the first Silurian rocks were identified. A common feature to all these names is that their representative rocks poke through the surface at places throughout Europe where geologists could see fossils, chip off samples of the chalks or limestones or marls, and borrow names originating from nearby localities.

When these rock groups were tagged, the world of geology largely belonged to English and Scottish gentlemen. Around 1840, Charles Lyell (eldest of ten children in a Scots family and a former lawyer) was turning the hobby of geology into a scientific pursuit, moving it from the armchairs of the leisure class and pushing it out into the field where rocks are actually found. Geology began as the activity of collecting  pretty stones and became a fundamental science with great economic interest. (Britain was becoming a coal-burning nation.) Geology also sought to understand how the Earth formed and evolved.

Lyell recognized that rock formations stack one atop the other as they form in seas, with older layers below younger ones. He knew that the rocks exposed near the town of Devon (Devonian rocks) are younger than those in the Silurian from the south Wales highlands. But it was no easy task, putting all those discontinuous and sometimes tilted or overturned layers in order. It must have been somewhat like assembling a gigantic jig-saw puzzle – without a guiding picture. Charles Lyell, by the way, did not name the Jurassic, Devonian, or Silurian. However, he did name some key divisions. His charting of stratigraphy resulted in splitting the recent Tertiary period into three parts which he called Pliocene, Miocene, and Eocene, epochs which saw the rise of mammals as well as the rise of the Himalayas. Lyell also named the more expansive Paleozoic, Mesozoic, and Cenozoic periods. All six terms are still used daily by geologists worldwide. Lyell’s enthusiasm for national geological surveys helped establish stratigraphic databases and tied discoveries around the world together within the new common nomenclature.

If you are wondering how important it is to know stories about hump-backed mammals, it’s essential. Without knowing the names of periods and epochs, you can get lost wandering around the world of geology. Books intended for general audiences often jump right in with the big words. Without knowing Triassic from Permian, you won’t know which side of the Great Dying (the Permian-Triassic extinction event) the author is talking about. Worse, you might not know which epoch had giant camels roaming around Canada’s arctic circle.

Ron Miksha is a bee ecologist working at the University of Calgary. He is also a geophysicist and does a bit of science writing and blogging. Ron has worked as a radio broadcaster, a beekeeper, and Earth scientist. (Ask him about seismic waves.) He's based in Calgary, Alberta, Canada.
View all posts by Ron Miksha →
This entry was posted in Geology, History and tagged Charles Lyell, Devonian, Epochs, Jura Mountains, Jurassic, stratigraphy. Bookmark the permalink.