Shutting Down the Plumes?

Near an Indian Ocean island that regularly exhausts smoke and lava, a group of scientists are trying to unravel one of the great mysteries of the Earth. Their riddle involves the planet’s largest basalt field, dinosaur extinction, and the birth of Hawaii. The scientists are on a search to prove the existence of plumes – flares of magma that are presumed to rise up from deep within the mantle, break through hot spots, and build volcanic islands. Plumes are integral to the modern theory of the Earth and scientists have been searching for them for 50 years. They are hard to find. It might be because they don’t exist.

Plumes were first proposed by Canadian geophysicist Tuzo Wilson in the 1960s as a way to resolve some puzzling problems that threatened to sink the whole idea of plate tectonics. Tectonics was catching on fast at the time, but some scientists pointed out that according to tectonics theory, Hawaii and Yellowstone shouldn’t exist. Such volcanoes and hot springs shouldn’t be found so far from active, jostling plate edges. Plate boundaries were the action spots. They had heat from the friction of colliding and subducting masses of crust. But Tuzo Wilson had an idea, a vivid image that rose unexpectedly in his mind. He pictured a girl lying under water in a stream, blowing bubbles to the surface. The disturbing image showed him a way to think about the Hawaiian island chain. Wilson imagined that hot magma came up from a fixed point, or hot spot, as Pacific Ocean crust passed overhead. This solved the problem of anomalous volcanoes, but the idea was so peculiar at the time that Wilson – an established, respected, 55-year-old geophysicist – couldn’t get it published. His paper was finally accepted in the obscure Canadian Journal of Physics. Wilson said it was accepted there because the editors didn’t understand it and didn’t know it was controversial.

Soon after Tuzo Wilson’s paper appeared, a young American, Jason Morgan, detailed the concept and made it more substantial. Morgan had already made his name as the first person to really explain, mathematically, how plates could twist, turn, and move. He applied a 200-year-old theorem by the great mathematician Euler to determine plate motion. Then Morgan picked up Wilson’s work with plumes and made that idea more plausible. In 1971, Morgan identified 20 likely hot spots that he felt were related to upwards convecting mantle plumes. These included Hawaii and the Indian Ocean island of La Réunion.

For half a century, we have known that Hawaii exists because a plume of magma coming from the mantle built its islands. But do we really know this? Qin Cao at M.I.T. sees the island chain differently. She and her team believe they may have discovered a much more shallow source for the island lava fields. She thinks channels in the upper mantle are feeding Hawaii from a source a thousand kilometers to the west. Other researchers, notably Don Anderson of Caltech, are also questioning the theory. He says that new seismic data suggest narrow plumes don’t exist. It is Anderson’s idea that such narrow jets of streaming hot magma would defy basic physics, adding, “Mantle plumes have never had a sound physical or logical basis.” His research concludes that closely spaced seismic stations, new ideas about plume theory, and advanced computational methods reveal that there are no narrow, jet-like hot plumes. Instead, according to Anderson, there are thousand-kilometer-wide chunks of mantle slowly rising. 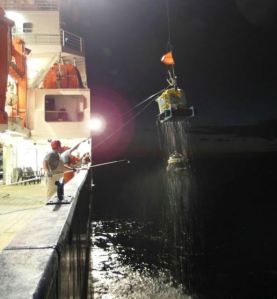 Retrieving a RHUM-RUM ocean-bottom seismometer in the Indian Ocean. Photo by permission of K. Sigloch.

The new sets of seismic data that Anderson is talking about include data from work led by geophysicist Karin Sigloch in the south Indian Ocean.  She heads the German team on a joint French-German effort called RHUM-RUM (Réunion Hotspot and Upper Mantle – Réunions Unterer Mantel). The project placed 57 ocean-bottom seismometers in a huge patch around the island of  La Réunion. As Sigloch says, the goal was to “image an oceanic mantle plume – or lack of plume – from crust to core beneath La Réunion Island.” There was originally ample presumed evidence that a stationary plume, originating near the mantle, had erupted millions of years ago. As surface crust passed overhead, the plume was believed to have generated India’s vast Deccan basalt plains, contributed to the demise of the dinosaurs, and left a scar across the Indian Ocean that stretches back to La Réunion, near Madagascar, where the plume continues to smoke and eject lava. In October 2013, Sigloch’s group retrieved the seismometers that might prove (or disprove) this concept. They are processing and interpreting the data at this moment. Results are a few months away.

Jason Morgan, the geophysicist who refined plume theory from Tuzo Wilson’s eerie dream, is nearly 80. Last year he made a trip to the south Indian Ocean and sailed around the fiery island of La Réunion while Karin Sigloch and a new generation of geophysicists retrieved the seismic monitors that might prove the existence of his elusive plumes. Always the curious adventurer, he blogged from the research ship about observing the team’s research and he added that the Southern Cross was magnificent in the evening sky. How would he feel if Sigloch and her team found no plume? He would probably not be too disappointed. Jason Morgan had always regarded scientific truths as temporary truths. Forty years ago, shortly after he had described plate tectonic motion, he was asked what could he possibly do to make an even greater name for himself. “I don’t know,” said Morgan. “Prove it wrong, I guess.”

Ron Miksha is a bee ecologist working at the University of Calgary. He is also a geophysicist and does a bit of science writing and blogging. Ron has worked as a radio broadcaster, a beekeeper, and Earth scientist. (Ask him about seismic waves.) He's based in Calgary, Alberta, Canada.
View all posts by Ron Miksha →
This entry was posted in Exploration, History, How Geophysics Works and tagged convection, Hawaii, heat physics, history, Jason Morgan, La Reunion, oceanography, plumes, Tuzo Wilson, volcanoes. Bookmark the permalink.