This Sunday, nature is throwing an unexpected surprise our way. Scientists have just discovered that an asteroid the size of a house will narrowly miss striking the Earth. If it should hit us, it would almost certainly spoil your weekend. It is expected to pass closer than some of our communications satellites, but it is not likely to take an earthwards plunge.

The Earth has had a long history of attracting over-sized meteors. When the Solar System was young, enormous amounts of rock and debris filled the Earth’s orbit. These materials regularly collided with our planet, heating it red hot, and adding to its mass. Scientists are fairly certain that an early collision with a planetoid created the Moon. Other impacts caused mass extinctions, likely including the demise of the dinosaurs. This photo, which I took in 1999, shows the rather tame Arizona crater that formed from a rock about 3 times larger than the one approaching the Earth today. We are told it released 10 megatonnes of energy.  (Whatever that means – I have trouble visualizing things in terms of detonated nuclear bombs.)

Astronomers are calling it a good-news-bad-news event. Good it will miss striking us; bad that we didn’t see it coming. Until today. Not that we would have sent Bruce Willis and a team of roughnecks from an oil rig to blast the rock apart. It’s just that we would have had more time to consider joining one of the world’s many doomsday religions that are actively seeking converts. 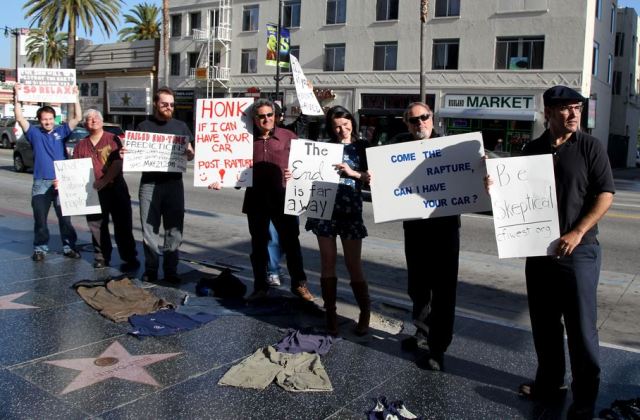 Ron Miksha is a bee ecologist working at the University of Calgary. He is also a geophysicist and does a bit of science writing and blogging. Ron has worked as a radio broadcaster, a beekeeper, and Earth scientist. (Ask him about seismic waves.) He's based in Calgary, Alberta, Canada. Ron has written two books, dozens of magazine and journal articles, and complements his first book, Bad Beekeeping, with the blog at badbeekeepingblog.com. Ron wrote his most recent book, The Mountain Mystery, for everyone who has looked at a mountain and wondered what miracles of nature set it upon the landscape. For more about Ron, including some cool pictures taken when he was a teenager, please check Ron's site: miksha.com.
View all posts by Ron Miksha →
This entry was posted in Religion, Space and tagged asteroids, crater, meteor. Bookmark the permalink.