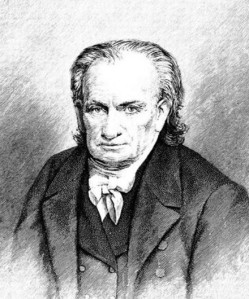 Convicted of forgery, American attorney Amos Eaton spent five years in prison. Released at age 40, his law career ruined, and still protesting his innocence, he moved on. That was in 1815. Geology became his greatest interest and teaching was his passion. His finest accomplishment was the introduction of a new style of science education – based on learning by doing. This fit well with the new country’s ‘can-do’ philosophy and utilitarian approach to everything. Eaton’s method of hands-on teaching had a huge impact on the level of science education in the United States for the next two centuries. He sometimes embarked students on barges and floated them along the Erie Canal where they sketched rock outcrops as they drifted along. In 1824, Eaton co-founded the Rensselaer School, dedicated to the “application of science to the common purposes of life.” Today the school is known as Rensselaer Polytechnic Institute and it is America’s oldest technology university.

We are remembering Amos Eaton on his birthday today (born in 1776) because of something he wrote in one of his books. It hits the heart of why geology (and especially geophysics) are such unique sciences.

Here’s what Eaton wrote in 1824:  “Geology has its peculiar difficulties, from which all other sciences are exempt. Questions in chemistry may be settled in the laboratory by experiment. Mathematical and philosophical questions may be discussed, while the materials for discussion are furnished by our own intellectual reflections. Plants, animals and minerals, may be arranged in the museum, and all questions relating to their intrinsic principles may be discussed with facility. But the relative positions, the shades of difference, the peculiar complexions, whether continuous or in subordinate beds, are subjects of enquiry in settling the character of rocks, which can be judged of while they are in situ only.”

I would like to carry Eaton’s idea a bit further. The obvious problem with understanding the Earth’s inner secrets is our lack of access. Most scientists – especially geologists – are hands-on folks. But we will never touch the Earth’s core. We won’t even get close. No one will ever explore the deep depths in a mantle-proof submarine. Much of our concept of inner-earth construction is inferred from remote measurements. Second-hand measurement can only allow inferences of what we might find, if we could actually experience the inner Earth.

Biology, physics, and chemistry are different. Those sciences permit experimentation – one can tinker with a formula, add more friction, burn chemicals at a higher temperature, feed a plant more nitrogen, then observe experimental results. But there is nothing an Earth scientist can do to affect the way the planet works and compare results with a control planet. We can not change the global magnetic field, briefly stop a spreading seafloor, or speed up the planet’s rotation. Experiments are impossible. Worse, we can not even isolate an interesting observation and separate it from all the variables that might have caused it. Earth science is a mind game, a puzzle solved through inferences. Models are constructed from observations and are true only until contradictory observations are made.

Read the book,  The Mountain Mystery.

Ron Miksha is a bee ecologist working at the University of Calgary. He is also a geophysicist and does a bit of science writing and blogging. Ron has worked as a radio broadcaster, a beekeeper, and Earth scientist. (Ask him about seismic waves.) He's based in Calgary, Alberta, Canada.
View all posts by Ron Miksha →
This entry was posted in Biography, How Geophysics Works, Philosophy, Science Education and tagged geophysics. Bookmark the permalink.