Getting Naked on Mount Kinabalu? 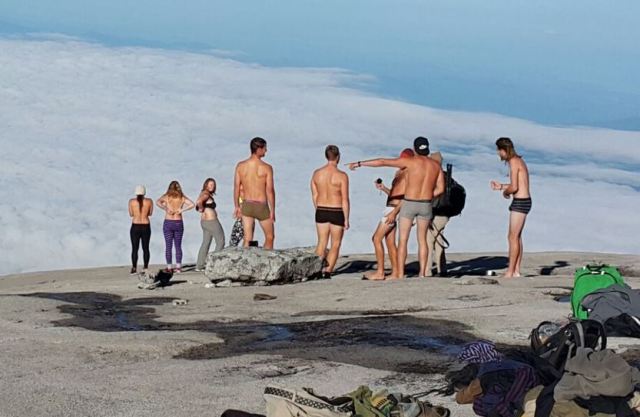 It’s all fun and games until you’re thrown into a Malaysian prison.
(photo from Mount Kinabula Facebook page)

If you have been following the seismic news, you have heard that a small group of merry-makers are being held in Malaysia for showing flesh on the wrong mountain. Their antics caused an earthquake, killing at least 13 people. The tourists were allegedly posing nude and/or nearly nude near the summit of Mount Kinabalu. Since the mountain is sacred to the fragile sensibilities of the Malay, such disrespect rankles the righteous. As it should. Personally, I’d be quite irritated if people stripped to their birthday suits on Mount Sinai, for example. Or if they sported a swimsuit while touring Saint Mark’s Basilica on the flooded Piazzo San Marco. Should I be so prudish? Yes. If there is a god guarding such holy places, surely he wouldn’t care. I would hope he has a sense of humour. Besides, he can always burn the miscreants’ souls in Hell later. But my irritation against anyone not following the rules is not because I think it offends any invisible friends, but because it offends people in the local community. Why should a dying grandfather or an aging nun on a pilgrimage in Venice put up with giggling 20-somethings wiggling half-clad bums at an altar of veneration? Should it be different if the people are Malaysian? Whether you believe the spot is sacred or not, it is simply not polite or respectful to other people who are serious about such things.

The group of foreigners (including two Canadians, which really irks me!) were among an entourage touring Malaysia’s outback when they allegedly slipped away from the other guests, removed all their clothes, and snapped some memorable pictures.  Yipee for them! It’s like, “look Dad, no clothes and no common sense”. Perhaps the party-makers will make a defence that they were ignorant of the law. They might argue that this is their normal behaviour whenever they leave their Saskatchewan home and go to the sacred mountains of Banff, Alberta. Or they may say that they’ve done this on the prairies where sweat-lodges make photogenic backdrops. Well, such antics in Canada may be overlooked. But anyone visiting Malaysia should have read the fine print in their Lonely Planet Rough Guide. They would have learned that Malays are even more prudish than I am.

However, there is more to the Mount Kinabalu story. The mountain is sacred to to the people who leave around it. They believe that Mount Kinabalu is home to the spirits of their relatives who await entry into a final afterlife. Such spirits are easily disturbed. As a result of the insult against the mountain and its spirits, there was a deadly earthquake. The Malaysian Foreign Minister feels that the 10 foreign tourists offended the spirits, who alerted the mountain, which shook in anger.  As a geophysicist, I have other ideas about the cause of earthquakes. However, I am used to religious people rejecting science in favour of inherited myths, so I am not surprised that the honourable minister would say this. 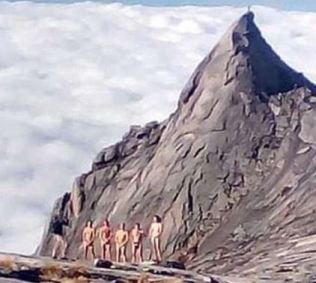 Yeah, they really did this.
(photo from social media)

The 5.9 magnitude quake, allegedly caused by the prancing naked tourists, dislodged rocks, killing at least 13 (6 more are missing). The ensuing landslide closed a popular hiking trail, trapping at least 170 others on the mountain.

One or more of the cheeky participants in the infamous photos posted their dirty deed on Facebook’s unofficial Mount Kinabalu page. (The photos have since been removed.) The two Canadians who posed together nude (or maybe semi-nude) are a brother and sister from southern Saskatchewan. Let’s hope they don’t have to spend more than a couple of years in a Malaysian prison. In fact, a local priest, anxious to calm the disturbed spirits, says that the 10 foreigners should just be required to donate 10 water buffalo. Male or female – the priest said either will be just as effective. (He is undoubtedly right about that.)  I presume the animals will be led up the mountain trail, then sacrificed. And that will surely prevent earthquake aftershocks.

Ron Miksha is a bee ecologist working at the University of Calgary. He is also a geophysicist and does a bit of science writing and blogging. Ron has worked as a radio broadcaster, a beekeeper, and Earth scientist. (Ask him about seismic waves.) He's based in Calgary, Alberta, Canada. Ron has written two books, dozens of magazine and journal articles, and complements his first book, Bad Beekeeping, with the blog at badbeekeepingblog.com. Ron wrote his most recent book, The Mountain Mystery, for everyone who has looked at a mountain and wondered what miracles of nature set it upon the landscape. For more about Ron, including some cool pictures taken when he was a teenager, please check Ron's site: miksha.com.
View all posts by Ron Miksha →
This entry was posted in Culture, Religion and tagged Malaysia, Mount Kinabalu, mountain spirits. Bookmark the permalink.

4 Responses to Getting Naked on Mount Kinabalu?